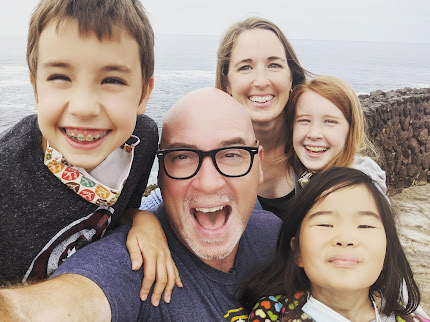 Jonathan Shradar describes his life ambition as “owning and exposing the fullness of Christ in all of life.” Toward that end he preaches a lot to his kids, and most weeks at Reservoir Church where he is an elder.
Jonathan had close to a decade of experience in political and nonprofit communications before earning a Master’s degree from Western Seminary in Biblical and Theological Studies. He has lived on both coasts of the U.S. and a few places in between and beyond. Currently he calls Southern California home with his wife Stacy and three awesome kids.

Popular posts from this blog

This week while in Phoenix for a couple of stirring days thinking about equipping the church and living into our missional calling together I experienced artisan disruption.  The lads and I were heading to the second day of the gathering and decided to find some local coffee spot to fuel our morning. When the first stop was closed we rounded the corner into another shop that pushed against our attempts at constant efficiency.  Inside a small art gallery (which also had a hair salon) there was a coffee bar, with one barista doing more than just making drinks, he was making art. The guy had form, precision, and and exacting hand as he made each drink.  The line was out the door yet he carried on, unhurried, unhindered by demand. He was the artisan.  At first I felt out of place. After all I am the guy who drinks from carafes at Panera because I have a sip membership. So to be in a bespoke establishment pulled me out of my element to begin with. This is a discomfort I enjoy
Read more

Admit it, you, like me have wasted entirely too much time thinking of new acronyms and poster ideas that will launch us into holiness. And all that we have achieved is lame preaching on being "better" and trying harder and the realization that we fail time and time again. We don't get grace. Matt Chandler is staring this problem in the face and calling it out. "The problem as I perceive it as a Pastor is that most of those who claim to know and love God want to see sin lose its power in their lives and walk in greater intimacy with Christ; most are exhausted and have been trying to mortify sin by promises and threats rather than through the weapons grace provides. By "promises" I mean they believe that they will have life to the “full” and get a great house in heaven if they behave in this manner or that manner..." "Another very popular sport... is fighting residual sin with our own vows and resolution—these become our defense.  In the end, you a
Read more

The Scandal of Free Turtles

My son has/had a couple of turtles. Red-eared sliders who thankfully resided at my dear Aunt's place in town. In her spoiling of my children, somehow turtles were purchased and nurtured. We saw these turtles every week and they were very well taken care of.  Then my beloved Aunt decides to move to Arizona. The plan had long been that once we bought a house the turtles would reside with us in a pond of some sort on our property. But as the inevitable transition approached we balked and my Aunt set out to find a new home for Fred and Percy.  This brings us to our scandalous story.  My Aunt arranged for the turtles to live in a pond, in a gated community, in the back yard of a local dentist. We set out on Sunday to meet and send off the turtles to their new home. But as we arrived at the gate, the doctor was not answering her phone and we didn't know how to get in.  After some time someone drove in and our cars quickly followed through the open gate. Parking at the house the secon
Read more

Husband to Stacy. Father to Iona, Ewen, and Adia. And dog-dad to Jones and Junia. Jonathan is a small church pastor in Escondido, CA. He likes people, books, music, wine, good ideas, and much more. Here he hopes to share his love for Christ and longing for the move of the Spirit in our day.